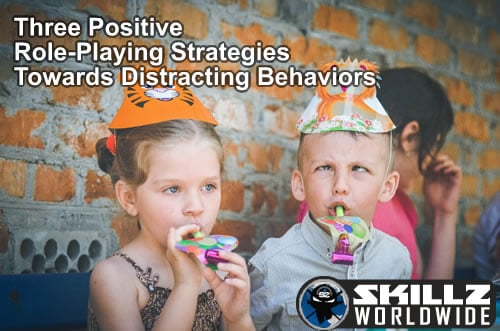 Many instructors say that they are great with children that listen in class, but struggle when children don’t listen; act silly; or thrown a tantrum. One important thing I remind instructors of when they say this is: Understand that most behaviors do have a positive intention and/or is a sign of the child’s individuality. What this means is that some children will act silly or out of bounds simply because he/she is trying to find his or her own path in life.

It also means that children who are aloof are not intentionally ignoring you, but they simply have a unique way of learning and growing. Some teachers will look at distracting behaviors as something negative.  Don’t assume that these behaviors mean that the child is bad. If you teach yourself to approach every behavior as simply a sign of the child’s individuality, and treat it with a positive approach, you’ll be surprised at the results. After all, it’s the individuality in every child that makes teaching fun.

Strategy 1: Dealing with a child that acts aloof

In my experience, children that act aloof respond best to kinesthetic or tactile training. They are not visual our auditory learners, therefore their minds will wander during lectures and demonstrations. With that said, remember that their “aloofness” is usually a sign that they learn best with touch and activeness.

Johnny is looking around the classroom as you speak about having a good side kick. You demonstrate how to kick with your heel, and while you are demonstrating you notice that Johnny is not watching.

In most cases, it’s that simple!

Strategy 2: Dealing with a child that acts silly

It can initially be frustrating for an instructor to have a student that acts silly while you are trying to teach. It is important to remember that children have one major passion: playing! They love to play and they love to pretend! This is their “job” or “career” as a child. In some cases, being silly is a child’s way of coping with all of the pressure of being a kid. In other situations, being silly is a child’s way of interacting with others.

It is important to remember that when a child is acting silly, it is not your fault and it is not a negative thing.  If you can learn how to nurture children’s silly behavior, then you will find all of the silliness quite entertaining.

During a drill where Johnny is supposed to jump over obstacles, he keeps falling on purpose. You notice that the rest of the students in class are laughing at him, and a few mock his behavior by falling too.

Strategy 3: Dealing with a child that acts out of bounds

Children that cry, throw tantrums or act aggressive usually don’t understand boundaries. They see the world as their playground, not our playground. This is a challenge for most teachers, but it doesn’t mean that the child is purposely trying to be bad.

As an instructor, it is our role to teach them about “fair play.” Show them how to establish boundaries and limits to their behavior. List the benefits of staying within the limits of appropriate behavior and they will learn why boundaries are important.

Johnny wants to go first in a fun game of ninja-ninja-turtle, but you pick Manny and that makes Johnny mad. He yells out “I wanted to go first!” and then folds his arms and hides his head in his arms.

Now let’s review what some instructors would think:

Good luck, and conquer the day!