The Science & Psychology Behind SKILLZ 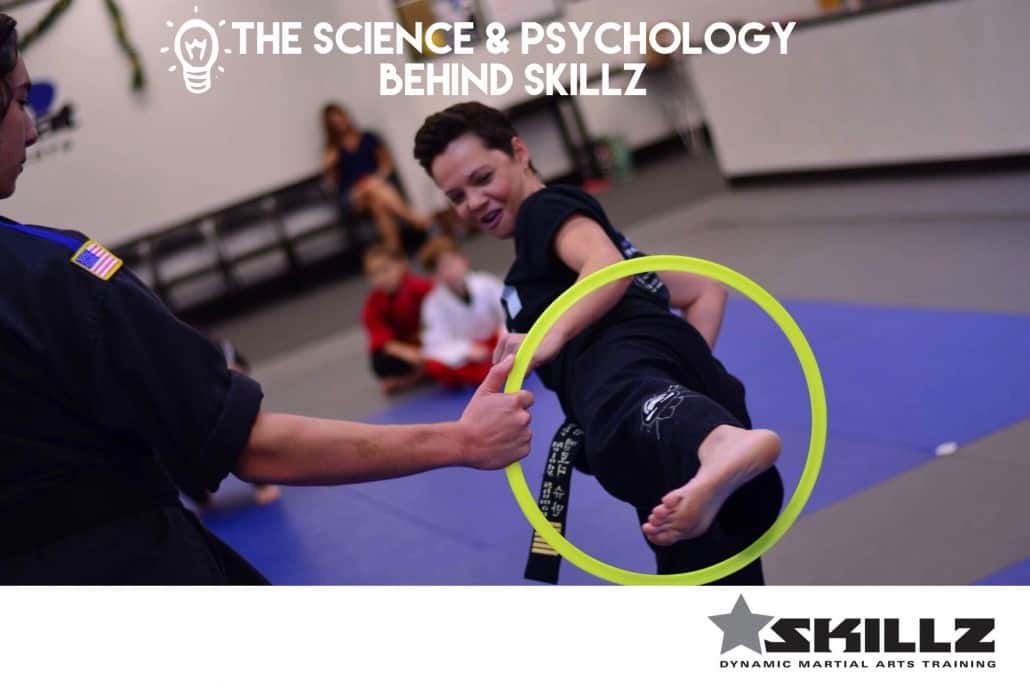 The Science & Psychology Behind SKILLZ

When I started martial arts in 1987 as an 11-year old, things were very different. Kids and adults trained side-by-side and everyone tested on the same material for their belt, regardless of age. Needless to say, kids usually didn’t make it very far before dropping out because the training became too challenging.

(Except for me, because my parents saw the many benefits of martial training as far as discipline goes, but that’s another story.)

I ultimately became a school owner when I was 19, and started to make changes to the way I taught martial arts compared to the way my instructors taught me. For starters, I pulled kids out of the adult classes. Then I took my experience from working at Disney and added “entertainment” into my children’s classes. The results were incredible!

As my school continued to grow, I kept studying the way kids learn. What I discovered goes against what ALL martial arts schools were providing for their children’s programs. What I also discovered is that martial arts programs could be one of the most effective tools for helping children grow as a whole, more so than any other sport or activity. From that moment, SKILLZ was born…

Age-Specific Training
Based on all of my research on children and learning, I discovered that children show developmental milestones based on specific age groups. These age groups – as they pertain to marital arts – are as follows: 3 & 4, 5 & 6, 7 to 9, and 10 to 14. This was a big discovery as most martial arts schools still only divided their children into two age groups: 6 and under and 7 and up. By sub-dividing my ages into more specific groups, I knew we would avoid common challenges such as “roller coaster classes” where almost EVERY drill was “too hard” for the younger students yet “too easy” for the older students.

At the same time, I also knew that within these age groups their development could be sub-divided into four categories: physical, intellectual, emotional, and social. This enabled me to create age-specific curriculums that helped develop each student as a whole; what I call 4-dimensional instruction. Most schools – and other sports and activities – still only focus on the physical and intellectual aspects of training. This breakthrough meant that we would target students’ stages of development with a curriculum that generates MAXIMUM results.

SKILLZ Curriculum
Once I understood students’ stages of development, I proceeded the meticulous task of creating curriculum through what I call a “reverse training concept.” What I mean by this is: instead of trying to pound martial arts training into each age group, I selected the top eight skills (or SKILLZ as I refer to them) that children were accustomed to in their particular stage of development, and then built a martial arts curriculum for each of those skills. I also made sure that the progression was so significant that by the time the student graduates from each program, they fall into the top 10% of their age group!

Integrating Systems That MAXIMIZE Learning
Once I created the SKILLZ curriculum, my final step was to create a system in which instructors were able to maximize learning. For starters, we deliver a mat chat after the warm-up in each class that initiates ACTIVE LEARNING, which in a nutshell is getting the students’ neurons to start firing. Secondly, we use game-based learning drills that kids “play” so that their WORKING MEMORY is stimulated. This basically means that within each student’s brain their neurons start to develop new connections; what scientists refer to as “neural growth”. Once their brain is developing neural connections at top speed, the last major segment of class is when they test for their skill-stripe, which helps foster FLUID INTELLIGENCE. This process is described at the brain’s ability to retain and reference information more efficiently.

Not All Schools Are Created Equal
As you can see, SKILLZ takes training to a whole new level! In fact, kids can’t even join their first class without an age-specific pre-evaluation to identify where his or her strengths are, and also how SKILLZ will help in his or her overall growth and development. SKILLZ is a product with several decades of ongoing research and development in how children learn and grow. The overall results are children that become better versions of themselves: physically, intellectually, emotionally, and socially!